Once in a while there is someone whose art work gets into your mind and won’t go away. This is what has happened to me with the art of Agnes Larkins, friend, student, supporter, whose death this February was a great sadness to all who knew her. A selection of her etchings forms part of the current exhibition at Dove Studios: on for only one more day…

I got to know Agnes 20 years ago when she started attending my Monday morning etching sessions. She got straight down to work and never stopped until last Autumn, when her illness finally prevented her from coming. Right from the start her work was original, inquiring and good. Like herself, it was quiet, but could flash out;

was experimental but somehow always worked,

was joyful but also dared to approach, with a characteristically light touch, the mysteries of life.

On her return back to the land of the living after one hospitalisation she created a book comprising seven dark etchings to describe her visions during that time: the introduction reads:

The Woman and the Dolphin

The woman didn’t leave her bed in daylight

Curtained off, unseen until dark.

A hooded figure crept out

And paced the ward.

When she returned to safety

she lay embracing a toy dolphin

almost as large as herself

it seemed to pacify her.

Watching from a distance

Her ritual became important to me.

Echoes of stories I had read

Drifted in and comforted me.

Images of healing when I closed my eyes.

Here are two of them. 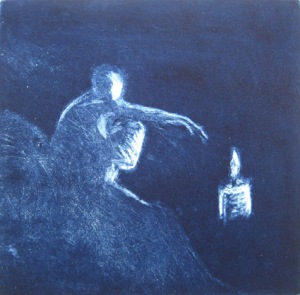 In a lighter vein, she could summon up the autumn wind with a few lines, 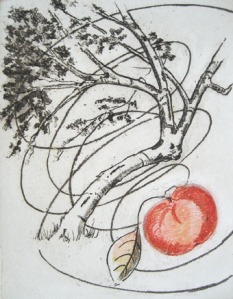 Imbue a drawing with great feeling with the same economy of line.

A year or so before the end of her life, the class in the studio was spoofing on the idea of doing ‘extreme’ etching, like extreme ironing while white water rafting, which had been on the tv. Agnes didn’t just join in: she was in fact the only one who actually went and did it, etching plates and tools in hand in a glider over the Pyrenees.

One of the last projects she undertook, which took her a year or more to complete with a well-paced urgency and the constant threat that it might remain unfinished because of ill-health, was a book of etchings each one a description of members of her close knit family. She called it: ‘Let’s go together and look at the sky  A Celebration’. Here is her nephew John: 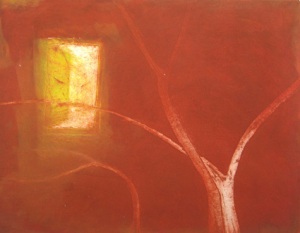 ‘John  Freedom  Let’s go and discover the reason for ducks’

And here is the last print, Agnes herself: 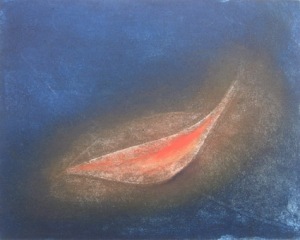 What a weekend! A kind of tangle of memories of gorgeous weather, good art and great people. The private view was quite extraordinary. I thought the weather would either bring people out, or they would stay in their own gardens. The former happened, and around 100 came. (How you all parked I don’t know, in fact I studiously avoided finding out.) I guess if you have 30  exhibitors you are going to get a crowd. It felt like a real community of art lovers both makers and supporters, and that is a precious thing in my book. When I walked out of the studio  at the end of the pv  and into a garden full of people with plates piled high with the food everyone had brought, it was a real loaves and fishes moment. I’d love to post a photo or two but hadn’t had time to take any, what’s more my camera was not to be found: has anyone reading this any photos they could email me and I’ll post here?

By the way, if you didn’t make it, remember the show’s on until Friday June 1st.

This year’s show is the most wide ranging yet: work by 30 or so students in the studio, including the Fingerprint goup of printmakers: books by the ABCD group, and in the house downstairs: a selection of work by the late Agnes Larkins, a regular at the Dove for 20 years. Lastly, in the upstairs studio, Tony Martin and I will be showing recent work.

Agnes never sold her work, and true to this ethos her family are offering her prints in exchange for a donation to her favourite charity: Sightsavers.

As a kind of postscript to all this (although postscript is the last definition you would apply to her), my mother Peggy Hooper-Smith is making some of her paintings and pastels available for sale at her bungalow in Butleigh: Rowans, High Street, Butleigh BA6 8SZ. All proceeds to Save the Children. This show will take place on one day only: May 26th, 11 – 5, or by appointment with me for the following week while the Dove show is on.

AWAKENING OUR HEARTFELT CONNECTION TO TREES

Campaign For A Living Venice