A double reblog: I too thought this sketchbook project would be of interest to Dove artists and others…thanks everyone who has passed it down the line. Click on the link to Notes to the Milkman if you want to view it.

This is an alert, really, to my new Abbey Variations blog which I’ve just cranked into action. You can get to it by clicking on the blue image in the sidebar, or by clicking on this link: www.glastonburyabbey.wordpress.com. You can follow it, which would be nice, as at the moment it’s a follower free zone, and so in effect I’m talking to myself. PS, if you do choose to follow it, do remember to give your email address: some people didn’t for my Venice blog, and then wondered why posts were not arriving in their in boxes.

I went into the Abbey yesterday, sketchbook and camera at the ready, expecting to be photographing old stone ruins, but instead was stopped in my tracks by this statue in the Visitor Centre: Madonna and Child by Eric Gill, 1928. Very appropriate, in actual fact, to be starting this project with an image of the Virgin, as the original wattle church was dedicated to Mary, and as Geoffrey Ashe reminds us: ‘The essential fact is that Ynys-Witrin (Glastonbury) was the first British home of the Virgin’s cult.’

This virgin was commissioned by Fr Francis Burdett for St Mary’s Catholic Church in Glastonbury where it remained in a prominent exterior niche until the church was rebuilt in 1940, and the statue was put in the garden of St Louis’ Convent next door: it seems no one wanted it in the new church. From there it found its way to a grave in the municipal cemetery, where someone eventually rescued it and it was presented to the Abbey. A wandering statue, possibly too modern for most people’s taste at the time: maybe embarrassing even. How lovely it is to me today. I must chase up the story and go to St Mary’s Church, where I have never been, in spite of living near Glastonbury for over 30 years. I go to the Abbey, and am directed straight out again. 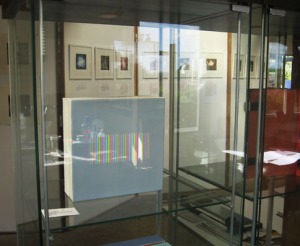 What I have learned from Somerset Art Weeks:
1. That around 300 people were prepared to trek out to the middle of nowhere to see some abstract art.
2. That these 300 people were mostly very interesting to talk to, and a few of them were prepared to buy art.
3. That buying work from the artist makes that artist very happy indeed. And not just because of the money.
4. That putting on a SAW show involves a lot of time and money, so I’d better enjoy it.
5. That there are very few abstract artists around, but there is good solid interest from the public.
6. That we need to find some way of encouraging art patronage rather than art tourism.
7. That SAW is in danger of becoming a community arts organisation rather than the artists’ network it once was.
8. That I can’t wait to get on with some new work.

A Celebration of the Dove Arts and Crafts Centre